Could Hidden Jawbone Infections – Cavitations – Be Affecting Your Health?

Not all dental problems are obvious ones. Infections in the jaw can go on for years without causing any pain or discomfort – infections that can have a real impact on your overall health.

One such infection that not many know about is chronic ischemic jawbone disease. “Chronic” simply means ongoing. “Ischemic” refers to a restricted blood supply – a condition that ultimately leads to gangrene, or the death and decay of body tissues.

For this reason, the condition is also sometimes called jawbone osteonecrosis, or bone death in the jaw. Most of the time, though, the lesions they cause are called cavitations.

No matter the name, they can have a big time effect on your overall health and well-being.

Over the years, research and clinical reports have linked cavitations to a wide array of inflammatory diseases. They may even be a “fundamental cause” of them. These include autoimmune conditions such as ALS, lupus, and MS, Alzheimer’s, Parkinson’s, cancer, and enigmatic conditions such as fibromyalgia, chronic fatigue, and multiple chemical sensitivity (MCS).

While there are many causes of cavitations, by far, the most common is oral surgery. According to research by Hal Huggins and Thomas Levy, 85% of all extractions result in cavitations.

Each of your teeth is attached to your jaw by a bit of tissue called the periodontal ligament. When a tooth is extracted, often, this ligament and other bits of supporting tissue are left behind. When this happens, the body responds as though the tooth were still there. As IAOMT President Dr. Michael Rehme has described it,

The continued presence of any portion of the ligament gives the biological message to the surrounding jawbone that all is well and no new bone growth is needed.

Healthy-looking new tissue may grow over the socket, but because of the lack of blood supply, tissues below begin to die. Like any dying organic matter, it begins to rot, and pathogens begin to accumulate. This damages the bone and surrounding tissues even more. 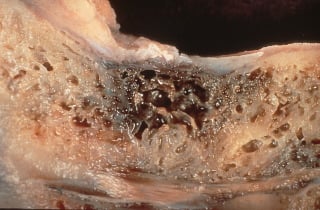 Additional toxins may come into play if the teeth are extracted due to disease. If the socket isn’t thoroughly disinfected, these lingering toxins may effectively be sealed into the jaw under the new surface tissue. With the reduced blood flow to the surgical area, the body’s ability to clear the toxins is likewise reduced.

Dr. Boyd Haley found that all cavitation tissue samples he tested contain toxins, which significantly inhibit one or more of the five basic body enzyme systems necessary in the production of energy. These toxins, which are most likely to be metabolic waste products of anaerobic bacteria (bacteria which don’t live in oxygen), may produce significant systemic effects, as well as play an important role in localized disease processes, which negatively affect the blood supply in the jawbone.

There are indications that other types of toxins also accumulate in cavitations, and when these toxins combine with certain chemicals or heavy metals (for example, mercury), much more potent toxins may form. High levels of mercury are commonly found in some cavitations and in general in the jawbone of those with mercury amalgam fillings and to have significant local and systemic effects. Mercury is known to be extremely toxic and to commonly cause chronic adverse local and systemic health effects. Yeast and fungi have also been found to accumulate in cavitations and to have significant systemic effects.

Ready for the good news? Cavitations are largely avoidable. If you’re recommended for oral surgery, it’s vital that the surgeon you choose is aware of the risks and knows to remove the periodontal ligament and properly clean the underlying bone. Ozone and platelet-rich fibrin (PRF) are excellent adjuncts for promoting a good outcome.

They’re also important tools during cavitation surgery. When cone beam imaging detects the presence of cavitations, we can open the old extraction site, remove the decaying tissue, and disinfect the area thoroughly with ozone. Before suturing, a bit of PRF – a membrane made with a small sample of the patient’s own blood – is placed over the surgical site to deliver critical growth factors and stimulate blood flow so proper healing can finally occur.

Where cavitations have contributed to long-term systemic health issues, formal detox under an integrative or naturopathic physician’s care is strongly advised to support your body’s natural healing abilities. High-dose IV C therapy is one of the most common detox supports – safe, effective, and well-tolerated by most people.

If you suspect cavitations may be playing a role in your overall health, we encourage you to contact us or a qualified biological dentist near you for an exam and imaging to see if this is indeed the case or if other oral factors may be contributing to your health woes.

For your body can only be truly healthy when your mouth is healthy.