Keeping It Clean with the Power of Ozone 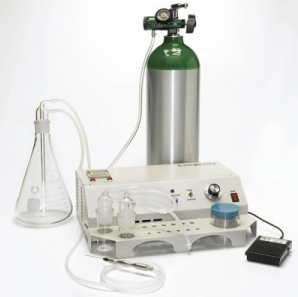 Ozone has a remarkable range of uses in dentistry, including preventing and treating gum disease, tooth decay, and other infections. But as a patient, you may be less aware of how it also helps keep our water lines clean and pathogen-free.

Dental unit water lines – DUWLs, for short – are those skinny tubes that deliver water to handpieces like the ultrasonic scaler we use for deep cleaning and the air/water syringe we use to rinse your mouth. If left untreated, biofilm builds up inside the tubes – slimy bacterial colonies that can quickly turn a water line into a veritable “flourishing petri dish,” as one hygienist has described it. One recent study found that about half of the bacteria found in untreated DUWLs were resistant to two or more antibiotics.

Water running through such lines contaminates it, putting patients at risk for infection. But as research confirms, ozone can help keep this from happening.

One of the most recent studies compared ozone to other types of water treatments on both old bacteria-contaminated DUWL tubes and, as a control, a Candida albicans solution. In addition to being treated with ozone, samples were also treated with 0.1% cetylpyridinium chloride (a broad-spectrum antimicrobial agent), chlorinated tap water, and phosphate-buffered saline. (These last two were used as “negative controls,” not expected to have any effect on the microbes.)

Surveying the microbes afterwards, the research team found that the ozone “reduced ATP levels in microbes to 50%” compared to the negative controls. And although already formed biofilms

remained on the surface of the tube,…the morphological characteristics of biofilms and bacteria changed, suggesting damage to the biofilms.

Other recent research testing ozone against other chemicals has likewise confirmed that ozone is effective for treating water lines.

At the same time, the study found that it did no damage to the DUWL components as chemical treatments can, while also being safer than the cytotoxic chemicals that some dental offices may use when cleaning the lines by a process called “shocking.”. (“Cytotoxic” means poisonous to cells.)

Of course, another benefit to using ozonated water is that it flows through the lines at all times, offering continual disinfection.

No side effects for you. No corrosion of dental equipment. No toxins. Just like O3 – the scientific name for ozone – that’s what you call a triple-win.