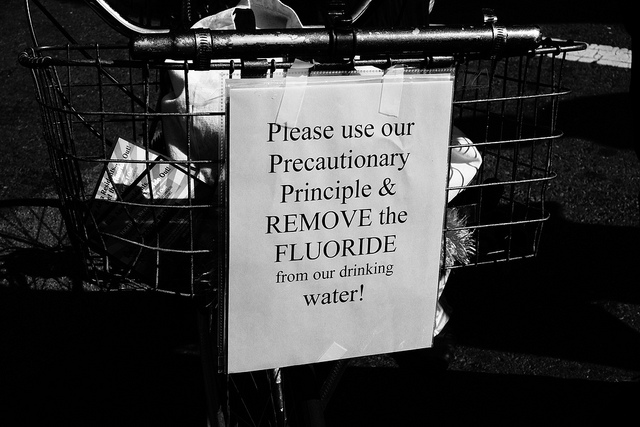 When an activity raises threats of harm to human health or the environment, precautionary measures should be taken even if some cause and effect relationships are not fully established scientifically.

Sure, you might have heard your grandma say “an ounce of prevention is worth a pound of cure,” “look before you leap” and “better safe than sorry,” as she initially steered you away from the new medicated tap water with skepticism. But, eventually science won out. Your grandmother’s concerns were replaced by advice from scientists and marketers who claimed they knew better.

You drank fluoridated water, brushed your teeth with fluoridated toothpaste, and gargled with the stuff because you believed in science. Heck, we all did.

Little did we know grandma’s aphorisms, born of traditional wisdom, not only persisted, but evolved into the cautionary script the Precautionary Principle is based on.

Today, 71-years after Grand Rapids first released fluoride into its water supply, almost 75-percent of the US population is chugging the stuff. But a growing number say, “not so fast!”

Fluoride is a Highly Toxic Substance

Fluorine is a naturally occurring poisonous element found on earth. It is turned into fluoride when it’s combined with other elements. The fluoride added to drinking water is a toxic form known as hydrofluosilicic acid. It’s actually a waste product collected from pollution control systems of phosphate fertilizer mines.

According to Dr. John Doull, who chaired the National Academy of Science’s review on Fluoride, “We have much less information than we should, considering how long it has been going on.”  His 2006 exhaustive study, which resulted in a 500-page report, concluded fluoride is an “endocrine disruptor” affecting bones, brain, the thyroid gland, the pineal gland and even blood sugar levels. The report Doull chaired called on NAS scientists to determine if current fluoride exposure in the US is contributing to chronic health issues.

Despite what we’ve been told by dental associations, fluoride doesn’t prevent decay. The truth is fluoride damages the teeth. Nearly half of all US teenagers show signs of dental fluorosis, visible mottling and discoloration of teeth, caused by exposure to fluoride.

Fluoride Exposure is Impossible to Gauge

Most of us didn’t know the government recently lowered the “safe” level of fluoride in drinking water to 0.7 parts per million. And, even if we did, why would it matter? With little awareness of when we are exposed to fluoride, or how much we are exposed to, it’s impossible to gauge our potential for harm from it.

Exposed ubiquitously, infants, children and adults are likely overdosing from sources that include

Fluoride is Not a Preventative Measure

We have all been trained to think of fluoride as our “security blanket,” protecting us from decay. The truth is, it’s made us lazy dependents. We’ve forgotten there are many ways to prevent dental decay without fluoride. Taking control into our own hands, learning proper brushing and flossing techniques, scheduling regular hygiene visits and exams are critical factors in achieving and maintaining oral health. And the best news is that these techniques don’t come with any side effects.